Ralph Nader, a political and consumer advocate and former presidential candidate, has issued a statement calling Tesla’s “so-called” full self-driving (FSD) technology “one of the most dangerous and irresponsible actions by a car company in decades.”

Nader is calling on the National Highway Traffic Safety Administration (NHTSA) to use its safety recall authority to order that FSD technology be removed in every Tesla. Per CEO Elon Musk’s recent statements, that’s about 100,000 vehicles.

The author of the bestselling book “Unsafe at Any Speed,” which criticized the American auto industry, cited research that found FSD malfunctions every eight minutes. That research was published in January by The Dawn Project, an organization aiming to ban unsafe software from safety-critical systems, which analyzed data from 21 YouTube videos of Tesla owners using FSD beta software.

“This nation should not allow this malfunctioning software which Tesla itself warns may do the ‘wrong thing at the worst time’ on the same streets where children walk to school,” wrote Nader. “Together we need to send an urgent message to the casualty-minded regulators that Americans must not be test dummies for a powerful, high-profile corporation and its celebrity CEO. No one is above the laws of manslaughter.”

Nader’s callout comes as Tesla is gearing up to release the next version of its FSD software, version 10.69, on August 20. Musk tweeted out the announcement, saying nothing about the next iteration’s capabilities other than: “This release will be big.” During Tesla’s Q2 earnings call, Musk also said Tesla would increase the price of the software and that the automaker was hoping to “solve full self-driving” by this year. 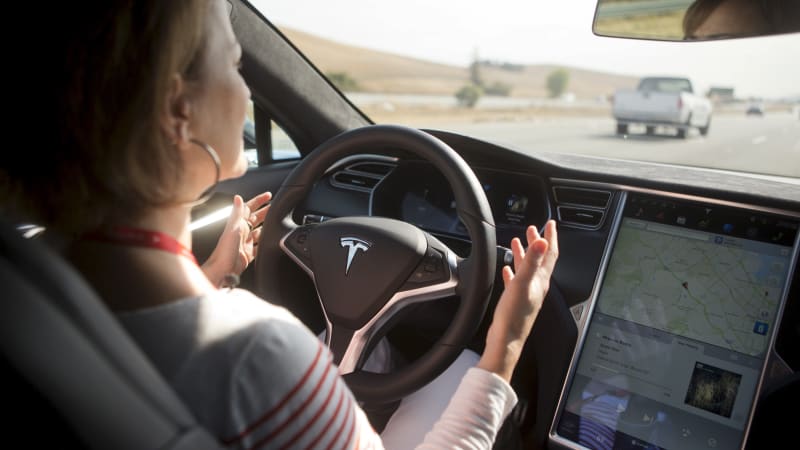 Really, Nader should be targeting Tesla’s Autopilot, as well. Tesla and Musk have been adamant in the past that FSD has not been responsible for any crashes or deaths. (However, a recent YouTube video from AI Addict shows a Tesla in FSD mode colliding with a bike lane barrier post.) Autopilot, on the other hand, has likely been the cause of several crashes. NHTSA is currently investigating 16 crashes in which Tesla owners were potentially engaging Autopilot and then crashed into stationary emergency vehicles, resulting in 15 injuries and one fatality. Since 2016, there have been 38 special investigations into crashes involving Tesla vehicles, of which 18 were fatal.

Other automakers have come out with similar ADAS technology, and based on NHTSA’s recent ADAS crash report, appear to have far fewer crashes. It’s difficult to compare how dangerous Tesla’s technology is in relation to its rivals, in part because there are far more ADAS-equipped Teslas on the road than any other vehicle.

NHTSA did not respond immediately for a request for comment.

In a pair of July 28 filings, the California Department of Motor Vehicles accused Tesla of false advertising to promote its Autopilot and FSD technologies — both of which are advanced driver assistance systems and do not provide full autonomous driving. While Tesla’s website states that “the currently enabled features require active driver supervision and do not make the vehicle autonomous,” the DMV told the Los Angeles Times that the disclaimer “contradicts the original untrue or misleading labels and claims, which is misleading, and does not cure the violation.”

The California DMV also said earlier this year that it was revisiting its approach to regulating Tesla’s autonomous vehicle technology, as the agency does with every other company that claims to pursue full self-driving and does public road testing. Tesla has gotten away without reporting crashes and system failures to the DMV for so long because its systems fall under the ADAS category, which requires a human driver must be present. However, after reviewing dozens of videos showing “dangerous use” of that technology — and such use is informed by the way Tesla and its CEO Elon Musk speak about the technology — the DMV decided to reevaluate.

This reevaluation is ongoing, and the DMV told TechCrunch it could not comment until it is complete. That said, based on the DMV’s most recent claims that Tesla is falsely advertising, Tesla could be facing revocation of its licenses to make or sell its cars in California, in the worst case. That probably won’t happen, but if it did, it would spell trouble for the EV maker. California is home to Tesla’s most loyal buyer base.

Musk has had a fraught relationship with the state ever since May 2020, when Alameda County ordered Tesla to shutter its Fremont factory to stop the spread of COVID. In October last year, Musk announced Tesla would be moving its headquarters to Austin, Texas.

The celebrity executive has also repeatedly underlined the importance of FSD to the company, saying in June that without it, Tesla is “worth basically zero.” It is likely based on the belief by many, including Nader, that FSD is not what it’s cracked up to be. Nader went on to tweet Wednesday that Tesla’s stock is vastly overvalued.

“Tesla and @elonmusk exposed the technological stagnation of the auto companies and broke ground with EVs and other climate-benign technologies,” tweeted Nader. “However, a fast moving company can not obscure wildly speculative stock valuation on top of a general stock market bubble that could implode on pension and mutual fund savings of millions of Americans. Fundamentals can’t be ignored.”