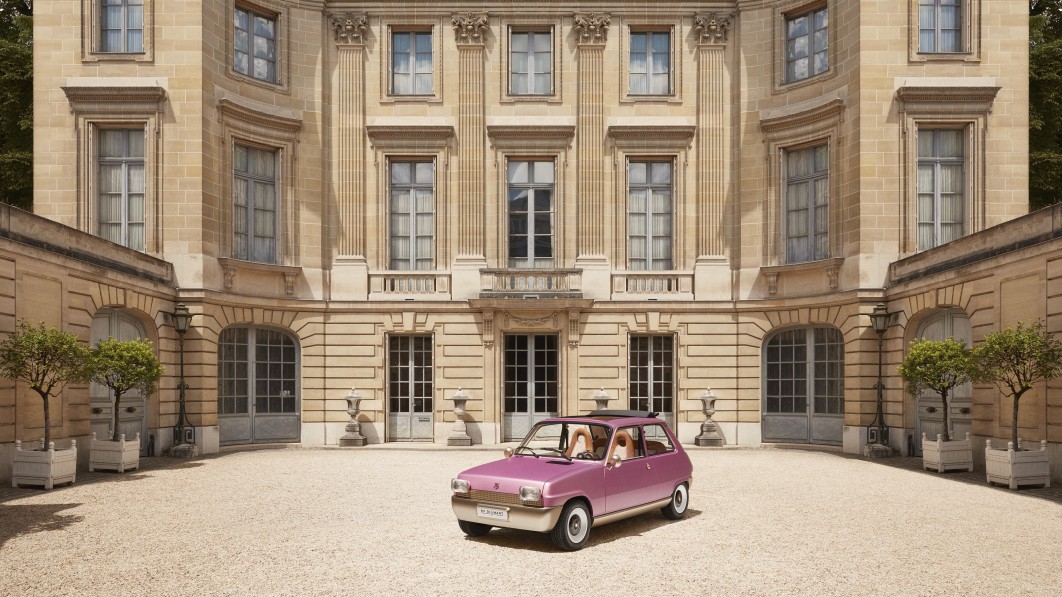 When automakers team up with non-car brands — fashion designers, artists, musicians and the like — the results can be a mixed bag. The finished product usually just gets slathered with some paint schemes and logos that could be applied to any car. If the creator had partnered with Audi instead of BMW, would the resulting car look all that different?

That is not the fate of the Renault R5 Diamant, a collab between the French company and Pierre Gonalons. Gonalons, an Italian-French product and interior designer, was given carte blanche to reimagine the Renault 5, a small hatchback built between 1972-84. During that time, the best-selling R5 was as popular in France as the original Fiat 500 was in Italy. It was so iconic, it was simply named “Le Car [The Car]” when it was marketed in the U.S. from 1976-83.

The Diamant, or French for “Diamond,” was created to mark the 50th anniversary of the 5’s debut. The internal combustion drivetrain was plucked out and replaced with an all-electric setup. Other modern technologies that would have seemed like science fiction in 1972 include a fingerprint reader to lock and unlock the doors.

However, the most significant changes to the R5 Diamant are in the design. The bodywork has been subtly modified to appear more aerodynamic. The front bumper becomes an attractive one-piece with just a hint of air dam, while still retaining a color-based contrast against the body. Speaking of which, the car has been painted in a fun purplish-pink frosted tri-coat while the formerly gray bumpers and rocker panels have been shifted to a fancy goldish-greige. The exterior is capped off by wider wheels from the Renault 5 Alpine hot hatch.

The boldest move by Gonalons is the Diamant’s headlights, which have been taken out of their bezels and hung from the front edge of the newly flush hood. Moreover, the lenses themselves have been given a jewel-like shape that resembles large gemstones, a theme repeated on the taillights. A new grille with a pixel grid motif not unlike another recent retro EV concept from Hyundai now extends all the way behind the lights to the fenders on either side. Impressively, even though the headlamps now hang out there like little crab eyes, somehow the car is still unmistakably a Renault 5.

The once-spartan interior has been transformed into a modern lounge-like space. Doorknob-like round brass spheres replace the original door handles both inside and out. The motif is repeated on the window switches and hatch latch as well. The general layout of the two-section dashboard remains, but the center stack that used to extend to the floor has been chopped short. Instead, we get a simple cradle for a smartphone that provides all the nav and infotainment one needs.

The rest of the cabin is a testament to French fashion and design. The lace-like fabric of the seats is produced by the fabric firm Métaphores. The horsehair fabric sections of the dashboard are made by Le Crin, a century-old weaver. The floormats are interspersed with mohair wool by Pinton, a French tapestry manufacturer. The centerpiece is a spiraling twirl of a steering wheel made with a recycled marble on carbon process.

Renault plans to offer NFT spinoffs from this otherwise excellent collab. Some will be digital representations of the car, others will be “inspired by” it. More details will be announced in September.

Whether you like the modifications or not, and we do, they are at least uniquely tailored to the R5. The same changes couldn’t be made to another car and have the same effect. Perhaps it’s because the R5 is already an iconic design, having sold 5 million units, or perhaps the compact foundation lends itself to more whimsy. Either way, it’s the kind of fun antidote we need to all the super serious and hyper aggressive EVs coming out these days.