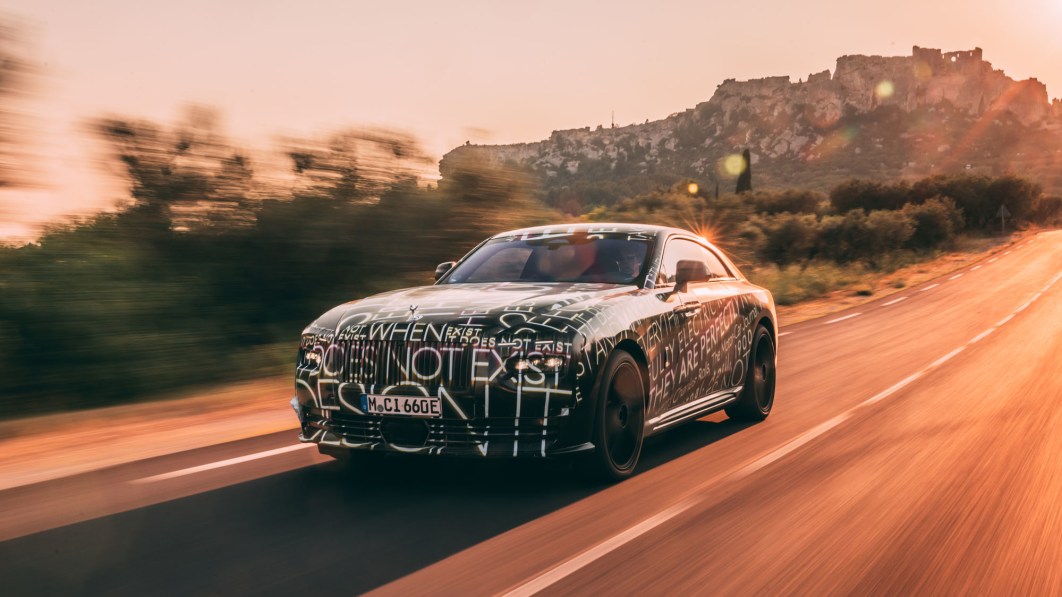 Rolls-Royce’s first series-produced electric model is well on its way to production. Called Spectre, the big coupe is undergoing shakedown testing on and off the track in the sunny south of France, and the British firm announced that development work is about 40% complete.

Going electric isn’t an excuse for Rolls-Royce to stray from the reputation for excellence that it has earned over the past 116 years, so engineers are putting the Spectre through the most rigorous testing program they’ve ever subjected a new model to. We’re told that, when all is said and done, the prototypes will have covered over 1.5 million miles of testing, which represents on average more than 400 years of use for a Rolls-Royce. Some test mules were sent to freeze in Sweden near the Arctic Circle, while others were shipped to the French Riviera.

Testing in France will be split into two parts. First, the Spectre will be put through its paces on the track that Rolls-Royce parent company BMW operates in Miramas, a town located about an hour west of Marseilles. Engineers will notably get the opportunity to drive the prototypes on handling courses, on a 3.1-mile oval with steep banks, and in standing water. when they have passed every challenge with flying colors, the prototypes will be sent out to the picturesque roads that zig-zag through the countryside surrounding the test track.

Rolls-Royce explained it’s putting a tremendous amount of effort into fine-tuning the Spectre because the coupe packs more technology than any model it has previously released. It features “141,200 sender-receiver relations and has more than 1,000 functions and more than 25,000 sub-functions,” according to the company, which is around three times more sender-receiver signals than in a typical Rolls-Royce.

The Spectre will inaugurate a new suspension system that promises to take the firm’s Magic Carpet Ride to the next level. It relies on technology that scopes out the road ahead and on data sent by the navigation system to decouple the anti-roll bars when needed, such as on a straight road, and recouple them as the car approaches a corner. The suspension system also gets firmer ahead of a bend.

Rolls-Royce hasn’t released powertrain specifications yet, and the Spectre’s final design remains hidden by camouflage, but the few official numbers available are impressive. Built on an aluminum-intensive platform and with aluminum body panels, the coupe features the longest doors that Rolls-Royce has ever fitted to a production car; they stretch 59 inches long, so they’re longer than the original Mini was wide. And, with a drag coefficient of 0.25 thanks in part to a redesigned Spirit of Ecstasy emblem, the Spectre is Rolls-Royce’s most aerodynamic car.

Deliveries of the Rolls-Royce Spectre are scheduled to start in the fourth quarter of 2023. Pricing hasn’t been announced yet.