“Now that it’s out, you can’t put it back in the box. This car is now in the room whenever anyone is talking about what’s possible and what’s not. It changes what you think is acceptable, and it changes your targets a bit.” That’s Malte Sievers, one of the Mercedes-Benz Vision EQXX’s project managers, talking about this achievement of a car.

Sievers was part of a small group given a simple-sounding task that was exceptionally difficult: Build an electric car capable of driving for over 1,000 kilometers (around 621 miles) on a single charge. In a gasoline- or diesel-powered car, achieving a 600-plus-mile driving range is easy: Fit a bigger (or a second) fuel tank and call it a good job well done. In an electric car, it’s much harder.

The team pulled it off. Unveiled in January 2022, the EQXX proved in April that it’s capable of breaking the 1,000-kilometer barrier by driving from Stuttgart, Germany, to Cassis, France, without stopping to charge. It headed to England and broke its own record by about 125 miles in June. It’s destined to remain a prototype, a rolling display of technology not designed or fit for mass production, but it will bring Mercedes-Benz engineers more than bragging rights. Many of the lessons learned during the project will influence the electric cars that the German company plans to release later in the 2020s.

I traveled to Germany to drive the EQXX and chat with some of the folks who developed it.

Mercedes launched the EQXX project in 2020. The only guideline it gave the men and women assigned to it was to find a way to cross the 1,000-kilometer mark. Projects like this aren’t common, but a look through the company’s history confirms that they’re also not unusual. We’ve seen several high-tech proof-of-concept-type experiments roll out of Stuttgart, including the Auto 2000 from 1981. While many previous projects focused on safety, the EQXX’s emphasis on range required starting with a blank slate.

The most important factor that affects efficiency, and in turn range, is aerodynamic drag. Designers achieved a 0.17 drag coefficient while retaining a shape that resembles a car (rather than a rocket with wheels), which is remarkable. By comparison, the most aerodynamic series-produced car that Mercedes has ever released is the electric EQS sedan, which posts a drag coefficient of 0.20. Leaping from, say, 0.30 to 0.20 requires a great deal of effort but it’s not terribly complicated. The jump from 0.20 to 0.17 is smaller but it’s a significant challenge. It helps that the EQXX is an EV: It doesn’t need a grille, which increases drag, to channel cooling air into the engine bay. Active aerodynamic parts come into play as well, such as a rear diffuser that lowers and extends either automatically or manually via a menu in the touchscreen. 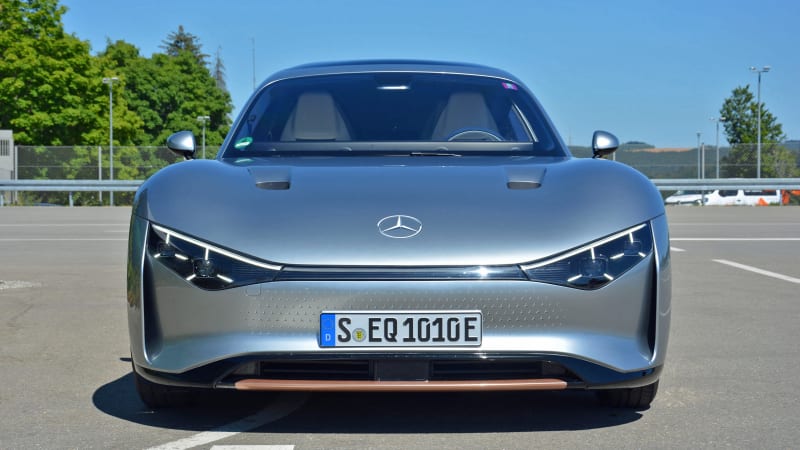 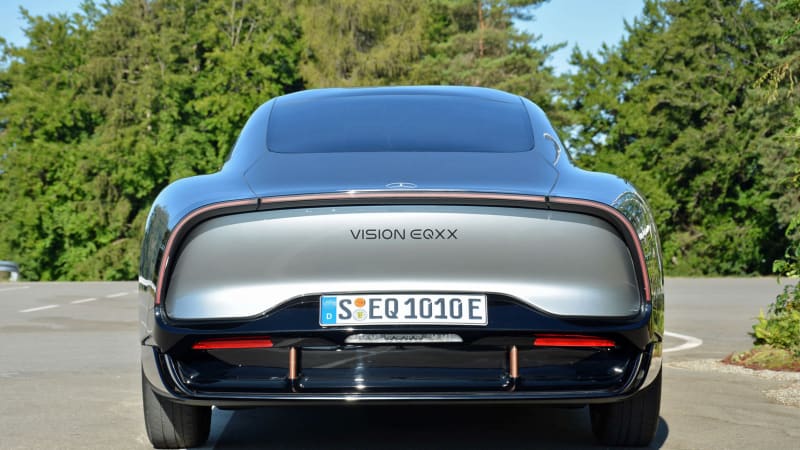 Making the drivetrain as efficient as possible required clearing several hurdles. Power for the EQXX comes from a rear-mounted motor that draws electricity from a sub-100-kilowatt-hour lithium-ion battery pack to zap the back wheels with 201 horsepower. It’s a unit called eATS 2.0 internally, and it’s currently being developed for the next generation of Mercedes-Benz EVs due out later in the 2020s.

Solar panels integrated into the roof help channel electricity to the battery pack. They add weight, but the tradeoff was worth it. When the EQXX covered the 747 miles separating Stuttgart and Silverstone, England, the 117-cell solar setup contributed approximately 26 miles of driving range.

Speaking of weight, reducing it is a proven way of improving efficiency. The EQXX tips the scale at 3,858 pounds, which is an impressive figure for an EV. Mercedes-Benz tapped into its vast Formula 1 expertise to achieve that figure.

“High Performance Powertrains, which provides drivetrains to the Formula 1 team, built the battery and the inverter,” Sievers said. “On the Formula 1 side, our team has engineers that specialize in carbon fiber and they provided parts like the battery’s lid as well as the subframe that the motor sits in.”

The powertrain was ready before the body, so engineers stuffed it inside an EQB-based test mule that they nicknamed Emma to put it through its paces. Champagne bottle caps glued to the underside of the hood mark Emma’s major achievements, like the day it moved under its own power for the first time. 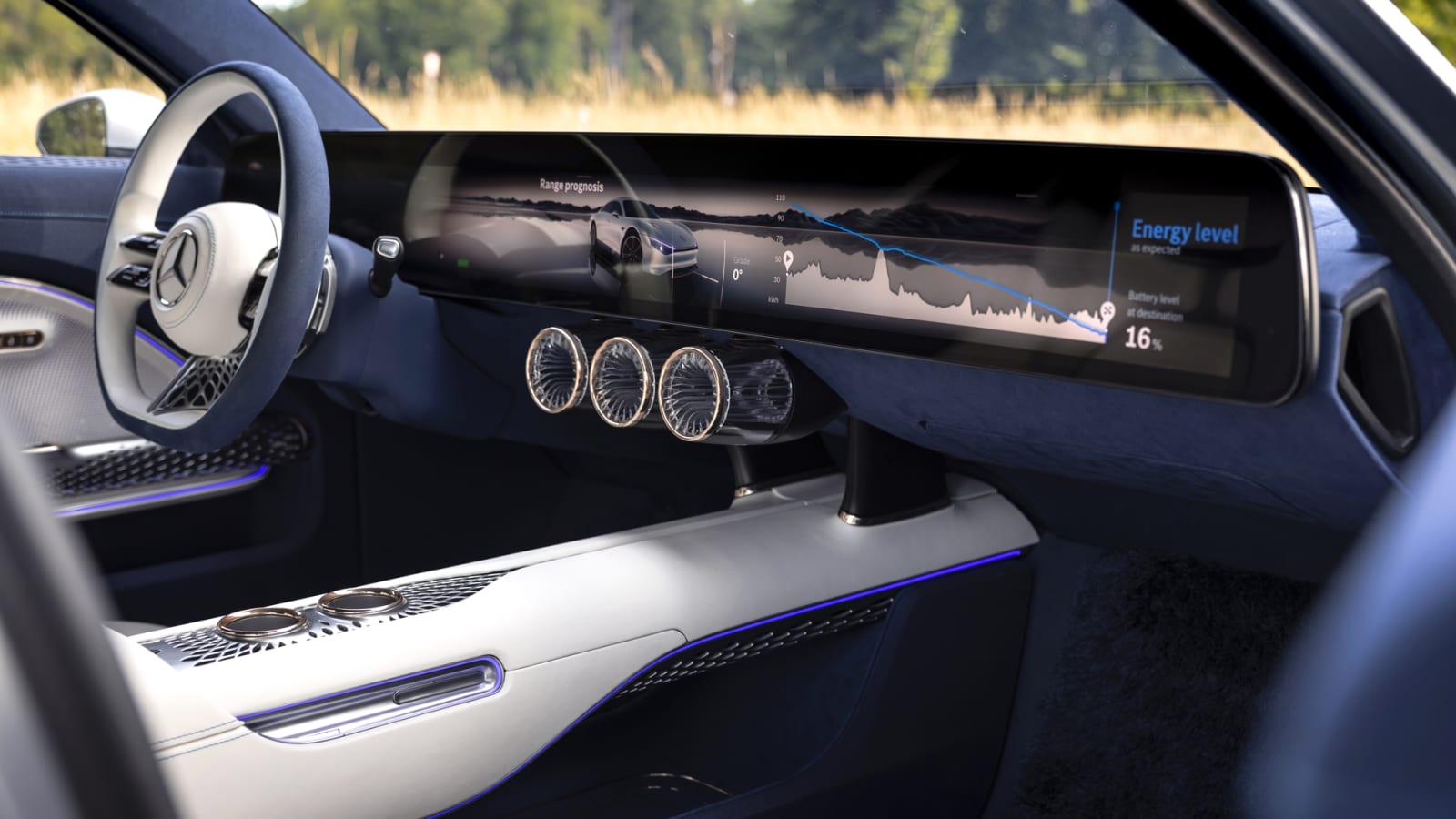 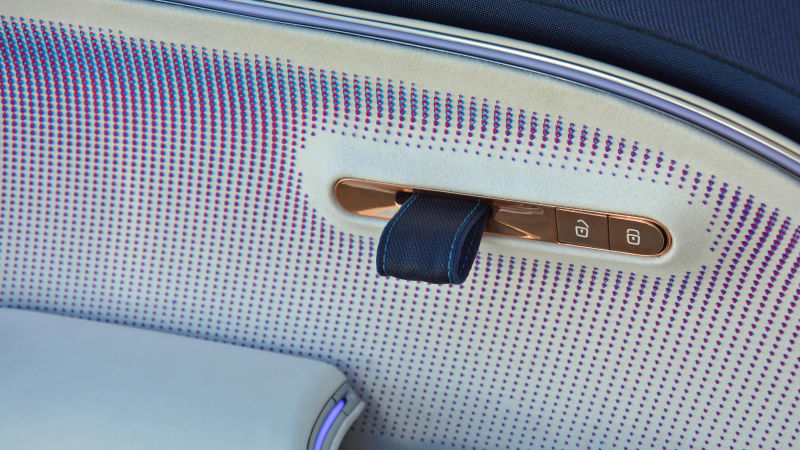 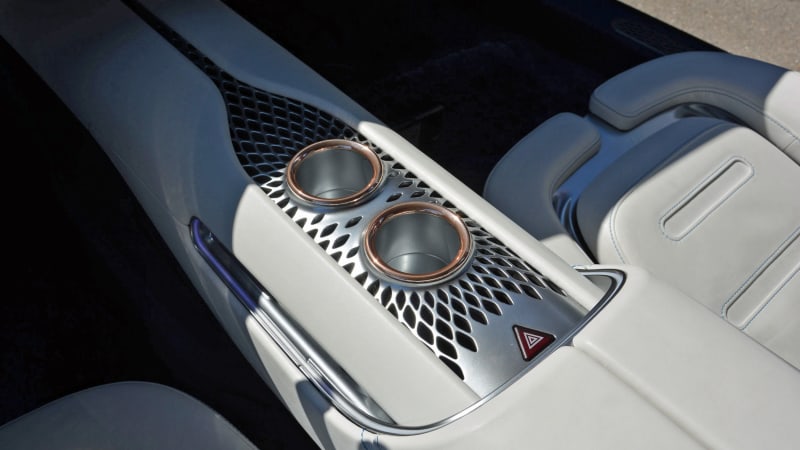 Because the EQXX is a one-off prototype, it’s easy to assume that it’s as empty inside as the Nevada desert. That’s not the case. Engineers and designers played a game of tug-of-war until they settled on a layout that’s elegant, well thought-out, and minimalist to keep weight in check. The multi-function steering wheel and the center console feature latticework-like trim, the air vents are fitted with transparent slats, and the dashboard is dominated by a wide screen that provides key information about the car, its powertrain, and its surroundings. There’s also air conditioning, 1970s-esque shag-style floor mats, and fabric door handles that may as well come from one of Porsche’s track-bred RS models.

Overall, the EQXX’s interior is similar to a concept car’s but not excessively futuristic. Several small details remind you that you’re sitting in a hand-built prototype, however. The door mirrors are fixed, for example. The rear doors don’t open, though there are two individual back seats, and there is no rearview mirror.

As I set out onto the network of roads that snake through Mercedes-Benz’s Immendingen test center, a small town-sized complex formerly used by the German army to test tanks, I realize that the EQXX was clearly built with an emphasis on drivability. It’s easier and far less daunting to drive than I assumed. It’s reasonably quick, almost completely silent, and smooth; it nearly drives like a series-produced car. My urge to scratch the “floor it!” itch is kept in check by Friedemann Flache, one of the engineers who worked on the EQXX project and one of the four drivers who road-tripped it from Stuttgart to Cassis. 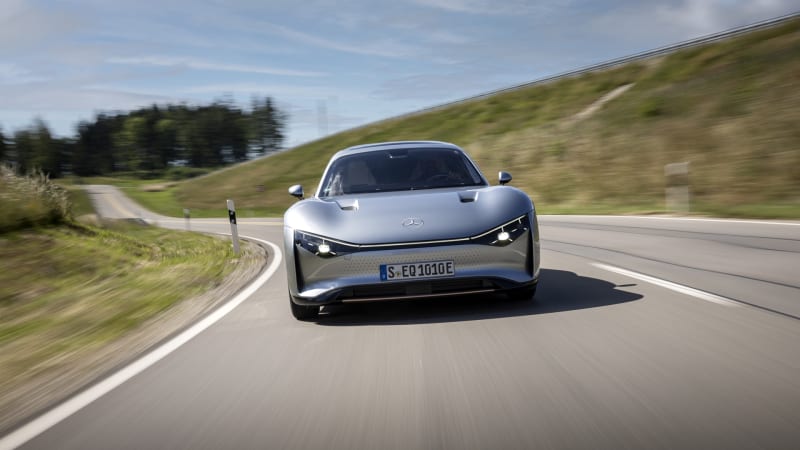 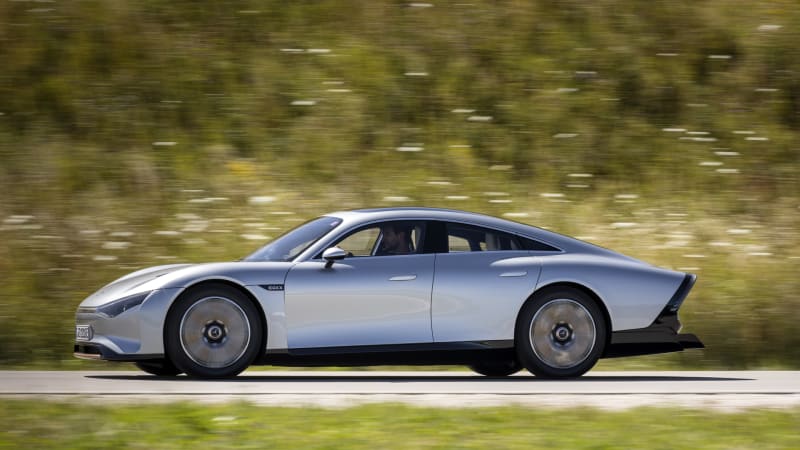 Riding shotgun as I navigate the 10-mile course, he reminds me that the best way to achieve maximum efficiency is to drive with slow, steady pedal inputs and to use the regenerative braking system to get the most out of the powertrain. One of the tricks baked into the EQXX is a fourth level of regeneration that’s not available on series-produced Mercedes models – not yet, at least. Called D–, it makes pure one-pedal driving possible, including slowing the EQXX to a complete stop when going downhill.

Mastering it almost requires learning how to drive again. On the same hill, I engaged D– using the paddle located on the left side of the steering wheel until the EQXX lost too much momentum, flicked the right-side paddle into D- or D to pick up speed, and got back into D– when I wanted to slow down again. I managed to go down a hill, turn right, enter a roundabout, and make my way out again without using the pedals.

The fourth regeneration profile, D+, allows the EQXX to coast without using energy or losing speed. This is where the 0.17 drag coefficient comes in. My first loop around the course was in the Emma prototype, which blends the EQXX’s powertrain with the EQB’s tall, boxy body (Mercedes pegs the regular-production model’s drag coefficient at 0.28). On a slight downhill slope in Emma, I stayed in D+ for a couple of seconds before flicking out of it because I was losing speed. In the EQXX, I stayed in D+ for the full stretch. 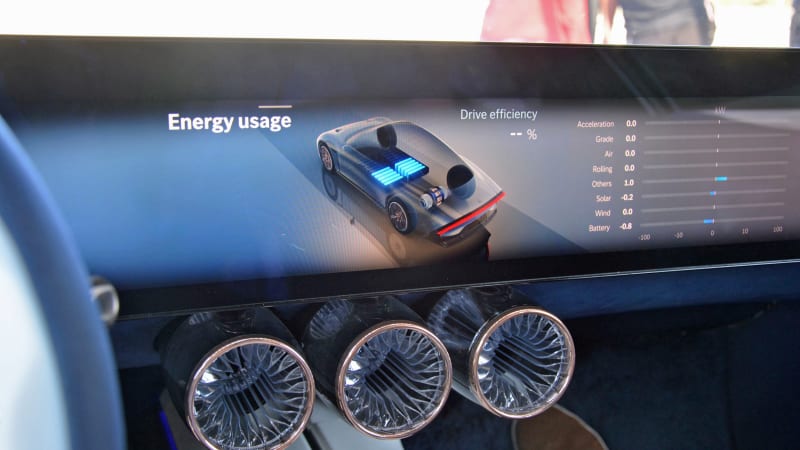 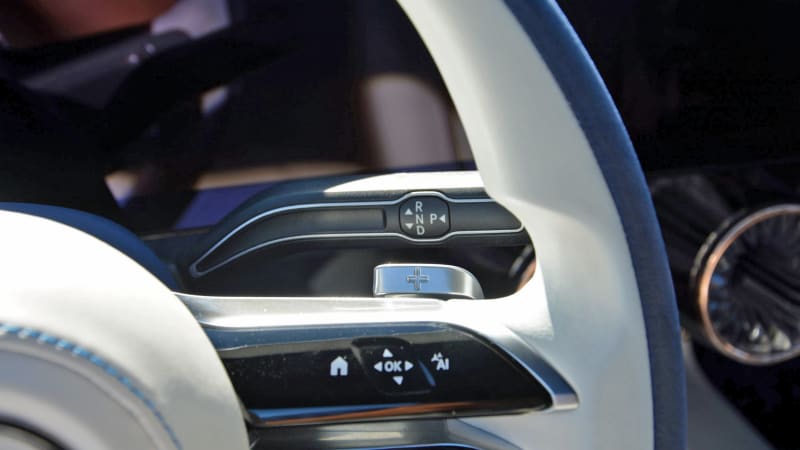 What happens if you drive the EQXX like a normal car? It’s pretty efficient, too. For about half of the course I drove it carefully and leisurely, just like I’d drive my own Mercedes, a diesel-powered 1979 300D with a four-speed stick. Neither were designed to be raced, but I wasn’t trying to hypermile my way to a Guinness record, either. Flache and I examined the data the EQXX compiled during my time behind the wheel and it showed an average consumption of 8.86 kilowatt-hours per 100 kilometers (about 62 miles). To provide much-needed context, Flache and his co-drivers averaged 8.7 on the trip to Cassis and 8.3 on the way to Silverstone. Here’s where the engineering might that went into the EQXX really shines: Without really trying, I came close to the average efficiency achieved by the folks who designed this car.

“We’re not going to crank these out by the thousands tomorrow. This is not what we set out to do,” Sievers said. What this means, then, is that the EQXX is headed to the pantheon of automotive history. It may resurface at an auto show or in the Mercedes museum, but it’s not going to see the light that awaits at the end of a production line. The lessons learned during the project will permeate a new generation of EVs that will be underpinned by an architecture called MMA internally. We’ll see it in 2024, and a new, “entry luxury” addition to the carmaker’s range will get the honor of inaugurating it.

In the meantime, Sievers hopes that the EQXX’s influence will resonate outside of Stuttgart.

“If any of our competitors start thinking this way, too, and start beating us, I think that will be perfect,” he said. “We would love that. This is the kind of arms race that you want to be in.”

There is a catch, however.

“It’s never going to be easy to beat this in terms of aerodynamics,” Sievers said. “The physics are not going to change.”