Car thefts are a growing problem in the United States. As vehicle values and the cost of parts increase, thieves are increasingly incentivized to steal and resell or part-out popular models. The National Insurance Crime Bureau released its annual Hot Wheels theft report for 2021, and the most popular stolen vehicles will surprise no one.

Chevrolet and Ford full-size trucks top the list, just as they did in 2020, and are joined by a who’s-who of popular sedans, trucks and SUVs. Many of the vehicles on the list are from the early 2000s, which tracks with the statistics from law enforcement. The Sacramento Bee recently interviewed members of the California Highway Patrol, who noted that older vehicles with turnkey ignition systems are favored because of the ease with which a thief can start them. Compare the list of early-2000s cars with the most popular models on the road, and it’s easy to see why Chevy and Ford pickup trucks from 2004 and 2006 were the most stolen vehicles nationally in 2001.

The National Insurance Crime Bureau’s research backs up that theory, stating that a vehicle’s popularity and relative availability on the streets contribute to them being stolen. The numbers are staggering, with the two full-size pickup trucks reaching nearly 50,000 thefts in 2021. The Honda Civic came in third with just over 30,000 thefts, and the Toyota Camry rounded out the top five with around 17,000. 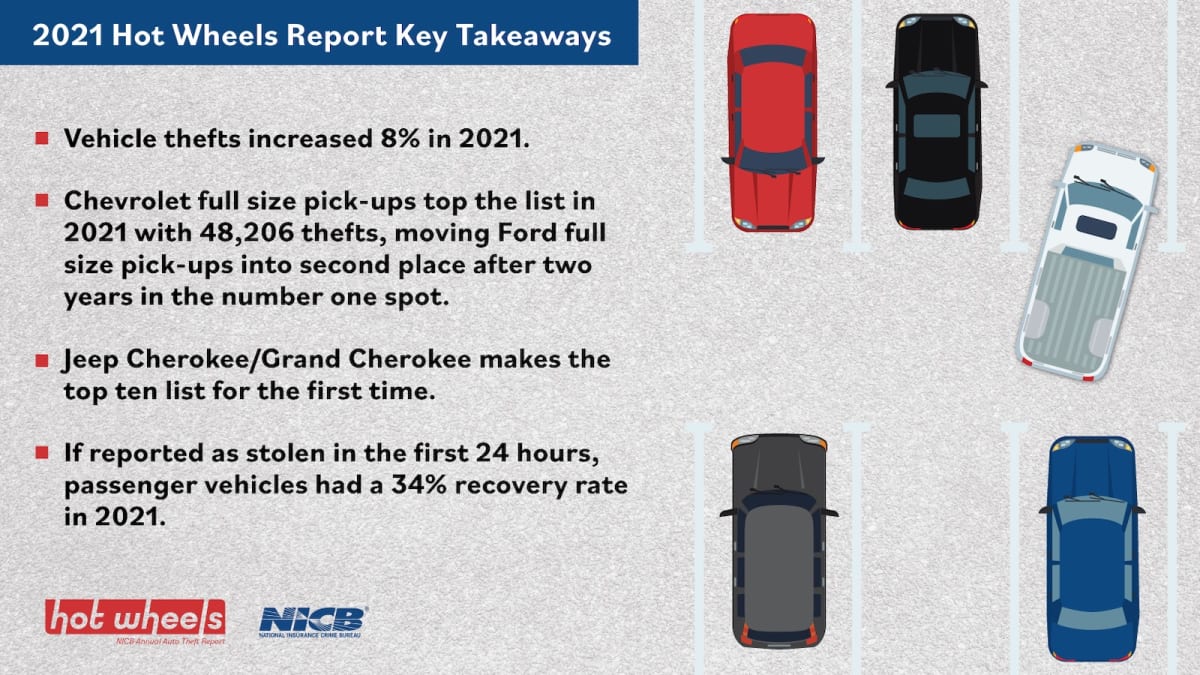 Read more: How to replace a lost or stolen car title

Another major contributor to the problem could be the ongoing supply chain shortages that have made new and used vehicles more expensive. Inventory shortages and sustained high demand have made all used vehicles more expensive, so it’s tempting for thieves to steal and export cars and trucks for disassembly in other countries. They can also be broken down for parts, which are growing in cost.

All of that said, what can you do to prevent your car from being stolen? The good news is that even if you’re driving one of the popular stolen cars on the list, you can take measures to make your car less appealing to thieves.

How to avoid being a victim of auto theft

It might seem obvious, but locking your doors is one of the best ways to protect your car. The added time it takes a thief to get past a locked door could be the thing that motivates them to look at another target. Sure, they could break your window and go about the job, but locked doors are an extra deterrent that could make the difference.

Clean out your car

Don’t leave valuables or other items in plain view inside your car. If thieves see money, a purse or wallet, or similar things lying around, it tells them that the car is likely worth breaking into. While a car thief may be looking for more than spare change and old CDs, it’s best not to give them unnecessary motivation.

Park in a safe place

It’s not always possible to park in a well-lit, secured parking garage, but where you leave your car could make all the difference. If you can’t find a well-lit spot in a garage or lot, street parking under a light or in a busy area is a good bet. The idea is to make your car as unappealing as possible, so lights and people can be significant theft deterrents.

Car alarms are great, but thieves have sometimes figured out how to disable or disarm them. A vehicle tracking system and vehicle immobilizer is an excellent way to prevent your car from disappearing. There are several inexpensive systems on the market, many of which offer convenient smartphone apps.