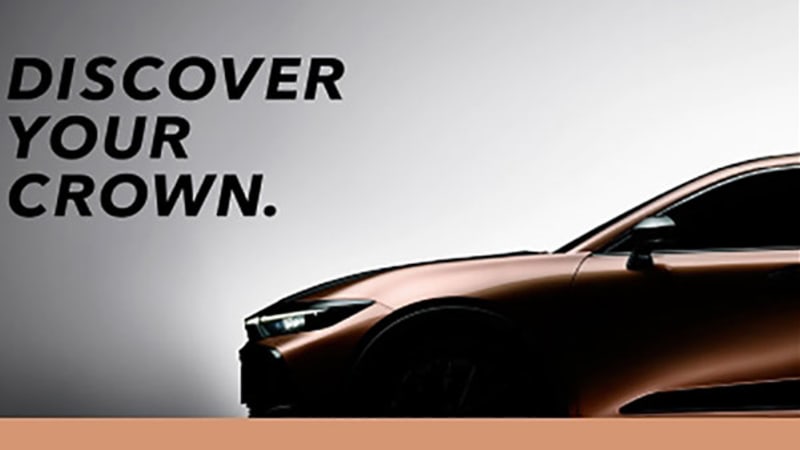 It seems there’s a new model called the Toyota Crown coming to the U.S. sometime soon. A Japanese microsite features the tagline “Discover your Crown” and two questions, “Sedan?” and “SUV?” The Japanese site Creative311 managed to swipe a teaser image of the front corner that matches up with the patent drawings. The countdown timer indicates the world will find out what’s up at 1:30 p.m. EDT July 15.

Putting the reports, rumors, and patent images together, this appears to be the revenge of the original Toyota Venza. That first Venza from 2009 was based on the Camry platform but didn’t want to be called a sedan nor a crossover, looking most like a jacked-up wagon. The automaker called it “The car, optimized,” and marketed it with the line, “You’re More than One Thing. So is Venza.” Even the name was a mashup, combining Venture and Monza. The coming Crown, on the other hand, will also be built on the Camry platform but it looks like a lifted sedan. It’s supposedly going to sit in a different price bracket, too. The Venza was designed to slot between the Camry and the Highlander, giving shoppers a Toyota alternative to the Edge and FX45. The Crown is apparently going to the top of the range, in keeping with the Crown brand values in its native Japan, with the starting price perhaps as high as $50,000. Of note, the car in the patent images wears a Crown badge on its hood, the Toyota badge appearing only in back.

The hybrid is said to be 194 inches long, 72.4 inches wide, and 60.6 inches tall on a 112.2-inch wheelbase. This would give it dimensions that — adhering to the gray area it’s being marketed with — don’t quite line up with the crossovers out there. Compared to a Ford Edge, these Crown dimensions utilize the same wheelbase but the body is 5 inches longer, 3.5 inches narrower, and a whopping 8 inches lower. We get the vibe this Crown might line up with the Ford Fusion Active, whenever that domestic wagon-esque vehicle arrives. Compared to the 2009 Venza, the Crown would come in at 5 inches longer, 2.5 inches narrower, and 3 inches lower on a wheelbase 3 inches shorter.

We’ve read the Crown badge is going to turn into at least two kinds of vehicles, though. A Reuters report said Toyota will roll out a new sedan version for Japan this summer. Then there will be this high-riding version for international markets that could be called the Crown Cross. Powertrain guesses have gone from 2.5-liter naturally aspirated four-cylinder with a CVT; to a 2.4-liter turbocharged four-cylinder hybrid with a six-speed automatic that’s used in the Lexus RX 500h; a plug-in hybrid; and a battery-electric version. Reuters said the hybrid is headed our way, the PHEV is Japan-only, and the others are not penciled in for the U.S. and are headed to parts unknown. Front-wheel drive is thought to be standard; all-wheel-drive of course on the menu for the U.S. market.

A leaked dealer document from February noted an October 2022 sale date for a 2023 Crown in the U.S. We have a few more days to find out.