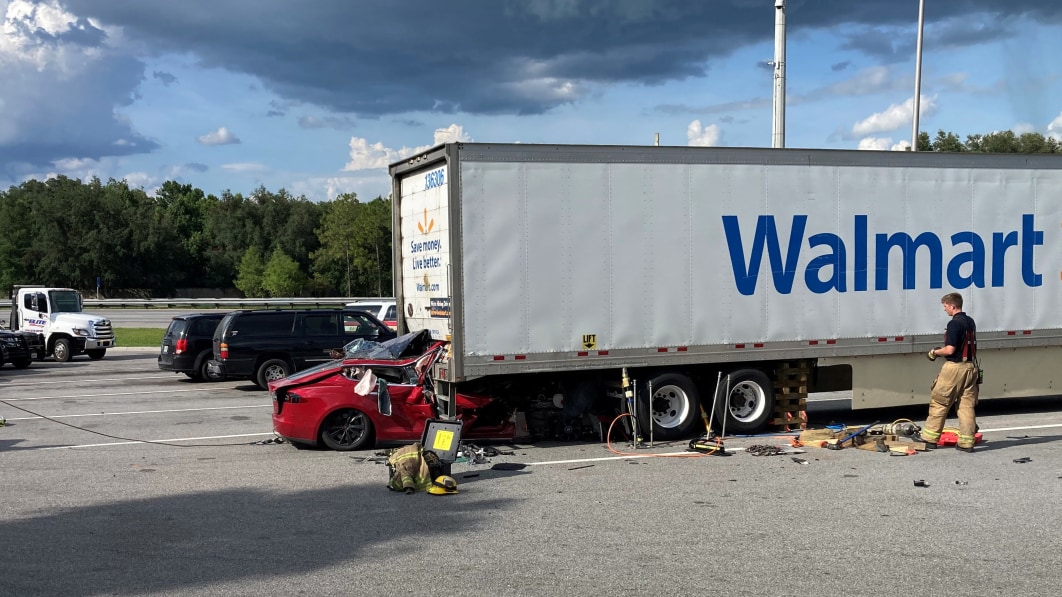 A Tesla rear-ended a tractor-trailer at a rest area off Interstate 75 near Gainesville, Fla., killing both the driver and passenger. (Reuters)

WASHINGTON — U.S. auto safety regulators have opened a special investigation into a fatal pedestrian crash in California involving a 2018 Tesla Model 3 where an advanced driver assistance system is suspected of use.

The National Highway Traffic Safety Administration (NHTSA) cited the California incident in an emailed update on Thursday but did not identify the specific crash.

The San Diego Union-Tribune reported on June 7 that a Tesla went airborne and struck and killed a woman. NBC-7 in San Diego said a 39-year-old man was charged with vehicular manslaughter and driving under the influence of drugs in the incident.

NHTSA had previously opened 35 special crash investigations involving Tesla vehicles in which advanced driver assistance systems like Autopilot were suspected of being used since 2016. NHTSA typically opens more than 100 special crash investigations annually into emerging technologies and other potential auto safety issues that have, for instance, previously helped to develop safety rules on airbags.

A total of 15 crash deaths have been reported in those Tesla investigations, including the most recent incident.

Tesla, which has disbanded its press office, did not respond to a request for comment.

Separately, NHTSA told Reuters it was aware of “and in discussions with Tesla” regarding a Florida crash on Wednesday that killed a 66-year-old Tesla driver and a 67-year-old passenger. A 2015 Tesla rear-ended a tractor-trailer in the Gainesville area at a rest area off Interstate 75, the Florida Highway Patrol said in a police report. Both people in the Tesla were pronounced dead at the scene.

In June, NHTSA upgraded its defect probe into 830,000 Tesla (TSLA.O) vehicles with Autopilot, a required step before it could seek a recall.

NHTSA opened a preliminary evaluation to assess the performance of the system in 765,000 vehicles after about a dozen crashes in which Tesla vehicles struck stopped emergency vehicles — and said last month it had identified six additional crashes.

NHTSA Administrator Steven Cliff told Reuters on Wednesday he wants to complete the Tesla Autopilot investigation “as quickly as we possibly can but I also want to get it right. There’s a lot of information that we need to comb through.”