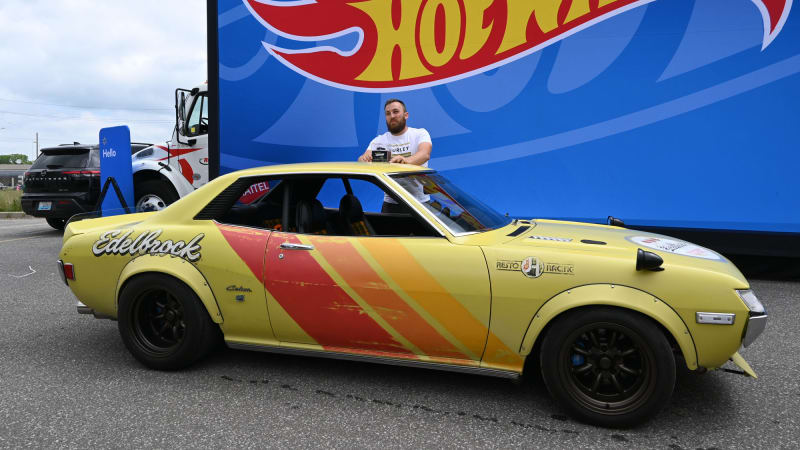 Hot Wheels took its search for the next custom-built car that it will add to its catalog of scale models across the Detroit River to Windsor, Canada. The winner of the latest Legends Tour stop is a 1973 Toyota Celica that has been heavily modified and nicknamed Tokyo Trans Am.

Kevin Huth spotted the coupe listed on Craigslist in Washington, brought it home to Canada, and finished it in time for the 2019 edition of the SEMA show. Visually, the modifications look relatively minor: Huth added aftermarket headlights; a body kit that includes a splitter, wheel arch flares, and a spoiler; and period-correct-looking graphics. Peek inside and you’ll begin to suspect that not everything is stock under the hood. There’s notably a hydraulic handbrake from Wilwood, a part that wasn’t on the list of available features that Toyota issued in 1973.

The most significant modifications are in the engine bay. The stock four-cylinder engine was yanked out and replaced by a 5.7-liter LS1 V8 sourced from the General Motors parts bin and tuned to deliver over 500 horsepower. This is the same basic engine that equipped a long list of Chevrolet and Pontiac models, including the fifth-generation Corvette and the Firebird Trans Am, though it never made 500 horses stock. The cavalry reaches the rear wheels via a manual transmission from a Nissan 370Z and an 8.8-inch rear end provided by a Ford Explorer.