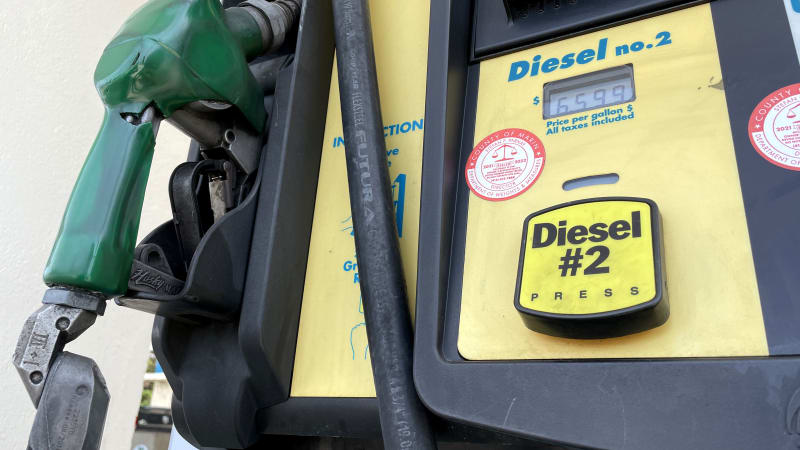 Diesel fuel powers the country. If that sounds dramatic, think of all the trucks, buses, and ships you see every day. Most of them carry diesel engines instead of the gasoline engine or electric drivetrain that your car probably has. It’s also used in generators and to power agricultural vehicles, making it one of the most important fuels of our time.

Gas and diesel engines are both internal combustion, which use a mixture of air and fuel. The cocktail is compressed by the engine’s cylinders and ignites. Spark plugs are used in gasoline engines to create the spark for ignition, but diesel engines don’t have them. They do have something called glow plugs to get the engine started up, and after that they use high compression ratios to crank up the heat, which can damage gas engines.

Because of this process, diesel engines are typically more fuel-efficient than gas engines. They also generate more torque at the same time, giving them pulling power that gasoline engines can’t muster. The extra rotating force at low speeds helps large trucks pull trailers up hills and start off the line.

Diesel fuel originated as a byproduct of the refining process for paraffin. At first, the fuel was discarded as waste, as no one could figure out what to do with it. It wasn’t until a man named Rudolf Diesel created an engine that could burn the stuff that it became useful as fuel.

Today, diesel is refined from crude oil and averages between 11 to 12 gallons of production from a 42-gallon barrel of oil. The United States also produces a large quantity of biomass-derived fuels from materials like vegetable oils and animal fats. This is why you see people converting old Mercedes-Benz diesels to run on used deep-fryer oil and similar materials.

Why is diesel so expensive?

One major reason diesel usually costs more to purchase in the United States than gasoline is that diesel is taxed at a higher rate. The Federal tax rate for diesel sits at 24.3 cents per gallon, compared to 18.3 cents per gallon for gasoline. On top of that, individual states add their own taxes to fuel purchases, and while those amounts vary from state to state, many (but not all) have higher rates for diesel than other fuels.

All our latest coverage on current gas prices

Supply and demand also plays a role in diesel fuel prices. While gasoline demand is relatively steady here in the United States, fuel supplier Cenex notes that diesel fuel prices are more likely to go up and down as demand rises and falls. The U.S. Energy Information Administration also notes that today’s low-sulfur diesel formulations are costlier to produce than older fuels.

Diesel engines are often more reliable than gas engines but that doesn’t mean they are entirely trouble-free. Their design means there are fewer opportunities for electrical issues, and the service intervals for diesel engines are generally much longer.

The downside is that diesel engines are often more expensive to fix and service when needed. Components like turbochargers, glow plugs, and others may require specially trained technicians, which always cost more.

All our latest coverage on diesel-powered cars, trucks and SUVs

Because diesels use a higher compression rating than gasoline engines, they tend to be more efficient. This is aided by the fact that many diesel engines come equipped with a turbocharger, which boosts power output and helps with fuel economy. That said, diesel fuel tends to be more expensive than gasoline and has been since the early 2000s.

Diesel fuel is not as flammable in normal conditions as gasoline, so there’s less chance that a spark or small flame ignites the fuel. A lit match thrown into a puddle of diesel fuel will go out instead of burning the liquid. It takes sustained exposure to a flame or high pressures to ignite diesel.

There’s a reason why Ferrari and Lamborghini don’t use diesel engines in their cars. While they’re great at making low-end torque and pulling power, diesels aren’t great at making speed. Diesel engines have lower max rpm levels, which, combined with the slower-burning fuel, produces more torque than horsepower. There are plenty of quick diesel vehicles out there and modified trucks that can burn their tires off for days, but in general, the fuel is much better suited for pulling than racing.

The days of the rattletrap diesel car are well past us at this point, but the fact remains that diesels just feel different than gas cars. They still produce more noise, and the general lack of immediacy when the driver puts their foot down may be surprising to some.

We talked about diesel fuel and the differences in price between it and gasoline, but it’s important to address the upfront costs of buying a diesel vehicle as well. Diesel engines usually cost more than their gasoline counterparts, are heavier and typically last longer than gasoline engines. In many cases, they also require a heavy-duty transmission to withstand the torque generated, which again adds cost. And, as we mentioned earlier, while their increased fuel efficiency is a positive, the fact that diesel fuel generally costs more than gasoline erodes that cost savings.