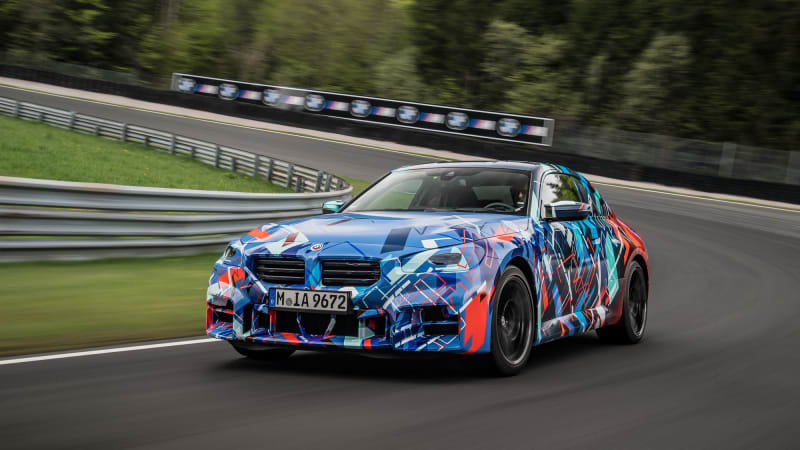 BMW M is nearly ready to lift the veil off of the second-generation M2, the last non-electrified car it will launch. We know that rear-wheel drive and both manual and automatic transmissions will be offered, but an unverified report claims all-wheel-drive will also be available.

Posting on enthusiast forum Bimmerpost, a user named Tag published an internal document that details the G87-generation M2’s xDrive all-wheel-drive system. It lists the components that make up the system, including a chain-driven transfer case that splits the engine’s torque evenly between the front and rear axles in normal driving conditions but that can send up to 100% of the output to either axle if needed.

The document’s authenticity hasn’t been confirmed, and BMW hasn’t commented on the report. The idea of an all-wheel-drive M2 isn’t too farfetched, however. The new 2022 2 Series is offered with xDrive all-wheel drive, so the basic shell is already configured to receive extra parts like a front axle. And, the Competition variants of the latest M3 and M4 models are available with all-wheel drive for the first time.

Regardless of whether horsepower and torque are routed to two or four wheels, they’ll come from a version of the 3.0-liter, twin-turbocharged straight-six that powers the aforementioned M3 and M4. Unofficial estimates peg the six’s horsepower rating at about 450, which is a big jump over the original M2‘s 365-horse rating, and BMW pledged the model will offer performance on par with the M2 CS.

BMW will answer all of our questions when it unveils the next M2 (pictured) in October 2022. Deliveries will start in April 2023.