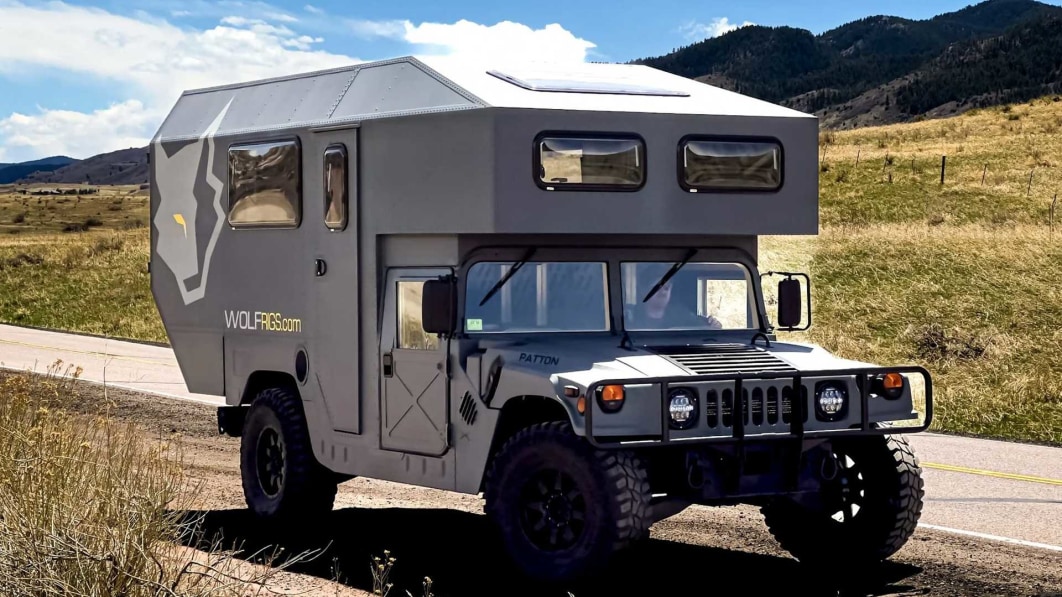 After his rifle and his gun, it’s possible a soldier is most familiar with the ins and outs of an AM General HMMWV. Englewood, Colorado, veteran Reed Gerdes took his time three years ago converting a Bluebird school bus into the Schutzengel Skoolie. But when he wanted to build an overlander that could beeline to GPS points visited mostly by snakes, insects, and Bigfoot, he and his veteran business partner chose a Hummer H1 as the base. Spotted by Motor1, their company is called Wolf Rigs and this first product is called the Patton, making another Army connection named after Reed’s father’s favorite general and favorite movie. And although the H1 is known for being a wide boy, the stock truck is 86.5 inches wide including mirrors. That makes the Patton narrower by a couple of whispers than similar chunky overlanders like the Ford F-350-based Earthcruiser Terranova.

There’s a diesel engine up front, the Patton Monroney indicating Wolf Rigs swapped one of the GM V8 oil-burners for a 3.9-liter Cummins inline-six, shifting through an Alison 1000 six-speed automatic. At the other end, 1/8-inch aircraft-grade aluminum plate frames living quarters that turn the Hummer’s military capability and 16 inches of ground clearance into good living. The rig, in fact, looks like the Army’s HMMWV ambulance but built to hold the hale and healthy. The two-tiered box contains an L-shaped bench, two-burner stove, sink, and slide-out fridge and freezer chests. At the back, a stand-up shower hides Wolf Rigs’ patented toilet that can retract into the wall. A queen-sized bed occupies the loft above the cockpit, looked over by a skylight, windows, and in-roof lighting. Outside, dual doors in back of the box open onto a storage area stocked with a full-sized spare, ladder, jerry cans, and a propane tank, but there’s room for plenty more. On top, 800 watts of solar power keeps the lights on and the food cold.

Gerdes told a local news station, “I wanted to build something for the ‘regular Joe.’” If the Patton’s starting price of $350,000 includes regular joes, then the new normal is a lot more expensive than we’ve been lead to believe. The aforementioned Terranova, likewise, starts at “just” $325,000 with an “adventure-ready” load-out. The Patton’s a very cool rig nonetheless, with owners practically guaranteed not to meet the same thing coming the other way down the trail unless they’ve wandered into areas that are hot for more reasons than just summer temps.

We highly recommend checking out the video above. Gerdes has a great story about how he got to the Skoolie and from there to the Patton.